The awarding ceremony for winners of the individual trampoline program at the FIG World Cup in Trampoline Gymnastics and Tumbling was held at the National Gymnastics Arena in Baku on February 16, Trend reports.

Among men, the best result was shown by China's Lei Gao, while the Belarusian athlete Ivan Litvinovich won the silver medal and another Chinese gymnast Dong Dong grabbed the bronze medal.

The awards were handed to the winners by the vice-president of the FIG Trampoline Gymnastics Technical Committee Dmitry Polyarush, member of the executive committee of the Azerbaijan Gymnastics Federation Mariana Vasileva and Director of the international relations department of Azerbaijan's National Olympic Committee Anar Baghirov.

The AGF Trophy Cup is also traditionally awarded for the highest score. The winners of the AGF Trophy Cup was China's Xueying Zhu and Uladzislau Hancharou of Belarus. The cup was presented by the President of the FIG Trampoline Gymnastics Technical Committee Horst Kunze.

The FIG World Cup in Trampoline Gymnastics and Tumbling is held at the National Gymnastics Arena in Baku on Feb. 15-16. Azerbaijan will be represented by gymnast Farid Mustafayev in the tumbling finals on February 16. 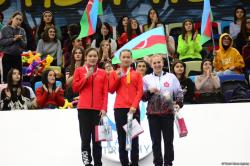 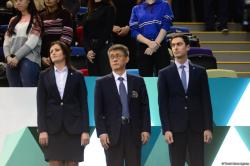