The cycling event was held at the Baku City Circuit before the Formula 1 SOCAR Azerbaijan Grand Prix 2019 on April 28, the Azerbaijani State Security Service told Trend.

The event was organized by the Cycling Sports Club of the Heydar Aliyev Academy of the Azerbaijani State Security Service on April 28.

It was traditionally sponsored by Formula 1 company and Azerbaijan Automobile Federation. 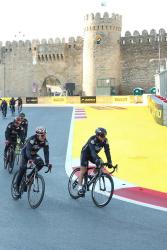