As an Official Supporter, Microsoft will be responsible for providing the technical software, equipment and branding around the delivery of the Baku 2017 Skype Zone.

This exciting and innovative initiative will enable medal winning athletes from all 57 ISSF member nations to celebrate their success with friends and family, courtesy of Microsoft’s video-calling platform. With three cameras recording their every reaction the Baku 2017 Skype Zone will help bring viewers closer to the most interesting personal stories from the Games.

The conversations will be recorded by the computer webcam, as well as cameras from behind the laptop screen and behind the athlete's shoulder. The initial 10-minute videos will be cut down to 90-second clips and shared online, via Baku 2017’s social media channels – (Facebook.com/baku2017; Twitter.com/Baku2017isg; Youtube.com/Baku2017).

Speaking about the announcement of the partnership with Microsoft, Elchin Safarov, Director of Baku 2017 Operation Committee, Mayor of Athletes Village and Ambassador of volunteers said: “We are delighted that such a globally recognized brand as Microsoft has agreed to be an Official Supporter of the Baku 2017 Islamic Solidarity Games.”

“The Baku 2017 Skype Zone breaks new ground and provides fans with a fantastic opportunity to share in the emotion of the athletes reacting to, and celebrating their success with friends and family.”

Mr. Sarkhan Hashimov, General Director of the Microsoft, Azerbaijan added: "Microsoft corporation is proud of being a partner to contribute to the major sport event 4th Islamic Solidarity Games. In the future we intend to support the implementation of projects of national importance through our innovative technological approach”

The opening ceremony of Baku 2017 Islamic Solidarity Games will take place on May 12. 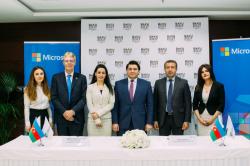