Yoga is growing in popularity in Azerbaijan. More people now practice yoga enjoying a wide range of its health benefits.

A yoga and poetry night has been arranged as part of the Word literary project held at Yanardag State Historical-Cultural and Natural Reserve.

The evening was attended by Vice-President of the Heydar Aliyev Foundation Leyla Aliyeva.

The next topic of the project was dedicated to demonstrating the existence of a special relationship between word, human body and spirit.

It is noteworthy that the event was arranged on the seventh day of the seventh month, on July 7. This is the personification of the mystical essence of the number seven.

Head of the project Nigar Hasanzade welcomed the event participants and presented the speakers. Then the participants started a yoga mediation aimed at harmony of the body and nature, inner peace and stability.

During the event, Leyla Aliyeva read her poem.

An Azerbaijani living in Amsterdam Mira continued the yoga session by performing an Indian dance. Then, brothers Firdovsi and Mehman Rasulovs and Nigar Hasanzadeh read their poems to the music. Afterwards, other young poets read poems in Azerbaijani and Russian.

The Word literary project aims to unite the talented young people who write both in native and foreign languages, and support the emergence of new creative intellectuals in the country.

The project's new concept implies holding open days for young authors, where they can meet with their friends, colleagues and the project management, share useful information, ask questions of interest and read their new works twice a month in a cozy cafe at Art Gallery Hotel.

All young poets who believe in their talents are invited to become a part of the literary project.

Over the 3 years, the Word literary project made a significant contribution to the support and development of domestic fiction and managed to change the fate of many young people participating in it.

Along with poems, many Baku citizens are also fond of yoga. The International Yoga Day is celebrated annually on June 21 and was internationally recognized by the United Nations General Assembly (UNGA) on December 11, 2014. The day is observed in many countries, including Azerbaijan.

The large-scale 5th Yoga and Health Festival has been held at the Seaside Boulevard in Baku. Every year all yoga fans of the city gather at a big festival to celebrate a significant event - International Day of Yoga.

Yoga is a series of exercises that combines physical, mental, and spiritual practice. The origins of Yoga may date back to pre-vedic Indian traditions. The word itself is derived from Sanscrit and means to join or unite.

Traditional yoga has a meditative and spiritual core in addition to the physical exercises. It combines physical poses, controlled breathing, and meditation or relaxation. Yoga may help reduce stress, lower blood pressure and lower your heart rate. 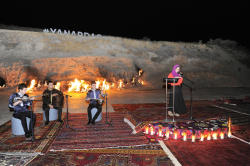