The Minister of Defense of Azerbaijan, Colonel General Zakir Hasanov and the leadership of the ministry, who visited the frontline zone as part of Large-Scale Operational-Tactical Exercises, also visited the foremost units stationed in various directions of the front, Trend reports referring to the ministry.

The defense minister checked the level of combat readiness of the units, watched the foremost positions of the Armenian armed forces and gave relevant instructions to suppress, based on the data obtained, immediately and with use of all types of firepower if needed, the enemy’s attempts to commit a provocation.

The large-scale operational-tactical exercises involving various types of troops, army corps and formations of the Azerbaijani Army kicked off on May 20 under the leadership of Minister of Defense, Colonel General Zakir Hasanov, according to the plan approved by Azerbaijani President, Supreme Commander-in-Chief of the Armed Forces Ilham Aliyev.

The exercises involve more up to 10,000 military personnel, 150 tanks, other armored vehicles, up to 200 rocket and artillery mounts of different caliber, multiple launch rocket systems, mortars, up to 35 aircraft and helicopters.

The exercises will complete on May 24. 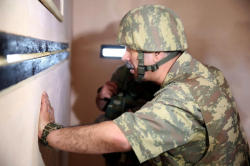