Presidential Aide Hikmat Hajiyev has said that Azerbaijan’s patience is not infinite and that Baku reserves the right to protect its territorial integrity and inviolability of its borders in accordance with Article 51 of the UN Charter.

Head of Foreign Policy Affairs Department of the Presidential Administration Hikmat Hajiyev made the remarks in an interview to the Agencia EFE, Spanish international news agency, on August 6.

The interview titled “Azerbaijan warns Armenia that its patience is not infinite” was published by the Spanish newspaper La Vanguardia and other Spanish-language newspapers.

Commenting on the recent military provocation by Armenia in the direction of Tovuz region of the Azerbaijan-Armenia state border, Hajiyev noted that official Baku supports the settlement of the Armenian-Azerbaijani conflict through negotiations, which necessarily involve the liberation of Nagorno-Karabakh and seven adjacent districts occupied by Armenians, as enshrined in the resolutions of the UN Security Council.

“Otherwise, Azerbaijan reserves the right to protect its territorial integrity and inviolability of its borders in accordance with Article 51 of the UN Charter,” Hajiyev stressed.

The presidential aide warned that the illegal military presence of the Armenian armed forces in the occupied territories of Azerbaijan is a source of the potential risk of unforeseeable consequences, and the continuation of Armenia's occupation policy reflects "medieval mentality".

“We have been participating in the negotiation process for almost thirty years. This fact, which can be called ‘strategic restraint’, is a clear sign of our country's constructive approach to the issue. However, we advocate for substantive negotiations that are aimed at achieving results,” he added.

“Baku will not negotiate for the sake of negotiations, negotiations cannot continue forever, because the current status quo is inadmissible and must change,” Hajiyev stressed.

Saying that Azerbaijan’s patience is not infinite, the presidential aide highlighted the fact that Armenia’s military occupation has been accompanied by war crimes and crimes against humanity, ethnic cleansing, and more than a million Azerbaijanis have become refugees and internally displaced persons as a result of the conflict.

Hajiyev emphasized that Armenia has to understand that in the 21st century, international relations cannot be regulated by the “law of the jungle", and that the international community should not ignore "who is the aggressor and who is a victim of the aggression”.

Furthermore, he touched upon the recent border escalation between Armenia and Azerbaijan initiated by the Armenian provocation. As for the periodic violations of the ceasefire in the Tovuz region of the Azerbaijani-Armenian border since July 12 and the death of Azerbaijani servicemen and one civilian, Hajiyev described these events a deliberate provocation, aggression against the sovereignty and territorial integrity of Azerbaijan.

In this regard, the presidential aide underlined that Yerevan has been pursuing several goals with such actions. Thus, one of its goals is to damage the strategic infrastructure of global oil and gas and transport projects in the Tovuz region of northwestern Azerbaijan.

Hajiyev noted that another goal of the Armenian leadership was to divert public opinion in Armenia from domestic problems, the persecution of the opposition and COVID-19 pandemic.

“From a military point of view, Armenia was seeking to seize strategic heights along the border and divert attention from the occupation of the Nagorno-Karabakh region and seven adjacent districts," he added.

Hajiyev pointed out that Armenia tried to involve the Collective Security Treaty Organization in this conflict.

“The Azerbaijani army repulsed all attacks and Yerevan did not achieve any of its goals," he concluded. 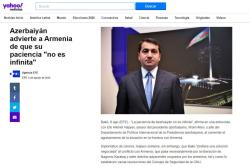