Marvelous concert has been solemnly held within the 12th Gabala Music Festival.

The concert gathered teachers of the Baku Music Academy which marks the 100th anniversary since its establishment.

The event opened with Uzeyir Hajibeyli's "Jangi" performed by the pianist Fagan Hasanli.

Further, the laureate of republican and international Maryam Yusifova, Lumineux ensemble and "Clarte" clarinet quartet delighted the audience with their magnificent performance. 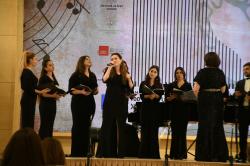