Reproduction of Tahir Salahov's painting "For You, Humanity!" has been displayed on an art track in Russia within "Follow Art" project.

The largest car participating in the project showcases a reproduction of one of the artist's most famous canvases, Trend Life reported.

Founded by FineArtWay company, the project specializes in art logistics and works with museums and galleries.

As part of the project, specialized vehicles designed to move art works from one museum to another are being transformed into a monumental public display area. The art truck route map covers the whole of Russia.

"For You, Humanity!" was created in 1961 by Tahir Salahov in Severe Style.

This painting is considered one of the most famous works of the artist. Since the huge canvas did not fit in Salahov's workshop, he painted it in a room not far from the school. The painting is kept in the Azerbaijan National Art Museum.

Salahov's works are presented in the biggest museums of Russia, Azerbaijan, Ukraine and other states of the former USSR, and are kept in many museum and private collections around the world. 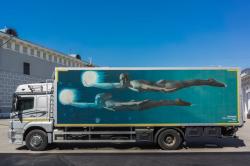