Azerbaijani poet Nasimi's monument has been erected in Russia with the support of the Heydar Aliyev Foundation.

The monument has been installed in the atrium of the All-Union State Library of Foreign Literature in central Moscow.

The statue has been made by the academician of the Russian Art Academy, talented sculptor Aydin Zeynalov.

Azerbaijani students of the B.Shyukin Theatre Institute read out poems by Imadeddin Nasimi.

The event was in the framework of the series of events held on the occasion of Nasimi’s 650th jubilee.

President Ilham Aliyev declared 2019 the Year of Nasimi in connection with the 650th anniversary of the great Azerbaijani poet.

Numerous scientific institutions, cultural centers, institutions and organizations are holding a series of events dedicated to the poet.

The first ever Nasimi Festival of Poetry, Arts, and Spirituality was held in Azerbaijan last year.The event was co-organized by the Heydar Aliyev Foundation and supported by the Azerbaijani Ministry of Culture.

Following its success, the 2nd Nasimi Festival of Poetry, Arts, and Spirituality was successfully held for the second time from September 28 to October 1, 2019.

The project is aimed at promotion of the national poet’s works, as well as exploring his philosophy, reflecting the phenomena of the modern world. Within the framework of the project, many events will be held in Nasimi’s hometown Shamakhi as well as in Baku.

On the same day,  Leyla Aliyeva met with members of the Azerbaijani Youth Organization of Russia (AYOR) in the Botanical Garden of the Moscow State University.

A painting exhibition "Pomegranate" was organized as part of the meeting. In addition, two pomegranate saplings were presented to the Botanical Garden.

The event continued with a spectacular concert programme. 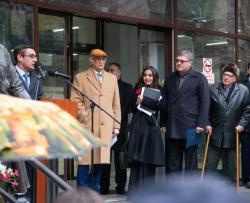