The 2nd Azerbaijani Folk Songs Festival has kicked off in Baku and Ganja.

The festival, aimed at promoting the country's spiritual values, is organized by Medeniyyet TV with the support of  the Ministry of Culture, the National Academy of Sciences, Azerbaijan National Conservatory, International Mugham Center, the Philharmonic Hall, Scientific and Methodological Center for Advanced Studies at the Ministry of Culture, ANAS Institute of Folklore.

At the opening ceremony, the festival's artistic director,  Honored Artist  and director of Mədəniyyət TV Ramil Gasimov noted that the goal of the project is to present to the audience the folk songs included in the Golden Fund of Radio, as well as rare compositions of folk art and songs that are transmitted from generation to generation in the regions of the country.

A scientific symposium with the participation of musicologists involved in the study of folk songs, performances of folk and vocal evenings are organized within the framework of the festival. Along with famous musicians, young professional singer also joined the festival. 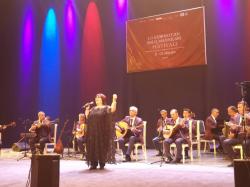