Azerbaijani athletes have taken part in the parade held as part of the Tokyo Olympic Games. 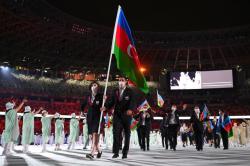