The Aerobic Gymnastics World Age Group Competitions was held in Baku for the first time, bringing together 12-14 and 15-17 years old gymnasts.

Gymnasts of both age groups performd in the Qualifications and Finals in the programs of “Individual Women”, "Individual Men", "Mixed Pairs", "Trios", and "Groups". The 15-17-year-old gymnasts were involved in "Aero Dance" program.

The competitions was held in accordance with the COVID-19 quarantine measures and without spectators.

Maryam Topchubashova reached the final of the Aerobic Gymnastics World Age Group Competitions in the individual program in Baku. The gymnast scored 18.400 points on the second day of the competitions.

The highest step of the podium was taken by the Russian team, the second place went to Hungary while Romania ranked third.

The closing ceremony of the World Aerobic Gymnastics Competition featured a parade of flags of the countries that took part in the competition.

A member of the Executive Committee of the International Gymnastics Federation (FIG) Ali Al-Hitmi addressed the event.

"Ladies and Gentlemen, we are attending the closing ceremony of the 9th World Age Group Aerobic Gymnastics Competition organized at a high level in a country that pays great attention to all sports, including gymnastics. On behalf of the International Gymnastics Federation and all participants, I express gratitude for the excellent work done to the local organizing committee, the Azerbaijan Gymnastics Federation, volunteers and everyone who worked at the event.Congratulations to the winners and wish everyone success in the upcoming events. I also want to thank the technical committee and the judges of the World Age Group Aerobic Gymnastics Competition," he said. 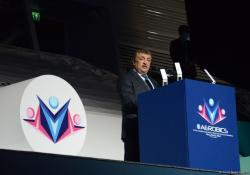