The head of state thanked for Recep Tayyip Erdogan`s greetings and holiday congratulations, and asked the minister to extend his greetings to the Turkish President.

Hulusi Akar on his behalf also congratulated the head of state on the occasion of the Victory Day.

Expressing his gratitude for the congratulations, President Ilham Aliyev noted that Hulusi Akar's visit to Shusha together with the Turkish Armed Forces’ leadership on this holiday was of crucial importance. Recalling with satisfaction President Recep Tayyip Erdogan’s recent visit to Fuzuli and Zangilan districts, the head of state described this as a symbol of friendly and brotherly relations between the two countries.

President Ilham Aliyev once again hailed Turkey's support for Azerbaijan during the Patriotic War, emphasizing that bilateral relations had been raised to a higher level in the post-war period.

The sides exchanged views on prospects for bilateral cooperation.

They then posed for photos. 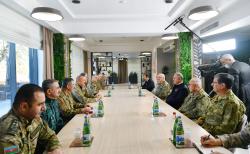