Hasanov was informed about all the necessary conditions created for the military personnel, the ministry said.

The military units have been equipped with modern equipment, furniture and inventory, as well as, weapon storages, barracks, canteens, kitchens, medical centers, food and storage facilities, bathrooms and toilets to improve the service conditions of personnel, the ministry added.

Moreover, generators have been installed to supply uninterrupted electricity for the military units and surrounded areas.

Addressing the military personnel, Hasanov stressed the historical importance of the victory in the Second Karabakh War and wished them success in their service.

The Defence Minister gave relevant instructions for the further improvement of the social, living and service conditions of the military units’ personnel.

Meantime, Hasanov inspected other military units being constructed in the mentioned regions.

Kalbajar and Lachin had been occupied by Armenia since early 1990s and were liberated as a result of the Second Karabakh war. The Russian-brokered trilateral peace deal signed by Baku, Yerevan and Moscow in November 10, 2020, ended the war and stipulated the return of Kalbajar, Lachin and Aghdam regions.

It should be noted that Azerbaijan continues building new military units and facilities in its liberated territories in the Second Karabakh war.

In July several new military units were inaugurated in Azerbaijan’s liberated Aghdam, Zangilan, Lachin, Khojavend, Khojaly regions. Azerbaijan has been opening military units in liberated regions to ensure the better reinforcement of its borders since the last year's war. 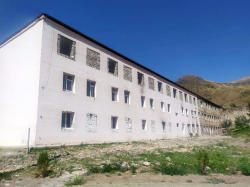