President of Azerbaijan Ilham Aliyev, First Lady Mehriban Aliyeva and their daughter Leyla Aliyeva have viewed the Sistine Chapel and St. Peter's Basilica in the Vatican.

A number of projects are being implemented at the moment by the Heydar Aliyev Foundation in Vatican. In accordance with the agreement signed in February 2019 between the Heydar Aliyev Foundation and the St. Peter’s Basilica, the bas-relief of “the meeting between Pope 1st Leo and Hun Emperor Attila” in the St. Peter’s Basilica and the “Tullius Zethus” Tomb in catacombs in Vatican’s Basilica are being restored by financial support from the Heydar Aliyev Foundation, and restoration works are nearing the end. According to the plan, the works are expected to be completed in May this year. In accordance with the agreement signed between the Heydar Aliyev Foundation and the Archaeological Council of the Holy See, works on restoration of the mausoleum in the catacombs “Saint Comodilia” are being carried out at the moment, and the project is expected to be finished in 2020. Last finishing works in the framework of the project “Restoration of catacombs in the Saint Sebastian Church-museum complex”, which was launched in 2016 and inaugurated in 2018 with participation of First Vice-President of the Republic of Azerbaijan Mehriban Aliyeva and Chairperson of the Pontifical Council of the Holy See Cardinal Gianfranco Ravazi, have been finalized.

The works carried out by the Heydar Aliyev Foundation are highly appreciated at the Holy See. These works demonstrate to the whole world the contribution made by the Foundation to universal values. Moreover, these projects also show the significance Azerbaijan has been attaching to monuments and holy places of various religions. And all these strengthen Azerbaijan’s position in the world, and its role in building a dialogue between religions, as a country loyal to multicultural values, and promoting these values.

The building where the Sistine Chapel is located is one of the most eminent monuments of the Italian art in Vatican, related to the Renaissance period. It was noted that frescoes depicting scenes from the lives of Mosey and Jesus were drawn on the walls of the chapel in 1481-1483. In the 15th century, world-renowned Italian sculptor Michelangelo created the artworks on the Chapel’s ceiling, and on the altar’s wall. This place is functioning also as a museum.

The St. Peter's Basilica in Vatican is one of the most famous examples of the Renaissance architecture, being one of the greatest churches in the world. St. Peter, who is considered to be the first Supreme Pontiff, is buried in the church. This building is also a holy place of pilgrimage and religious ceremonies. Therefore, since the early Christian times, majority of the pontiffs were buried here. 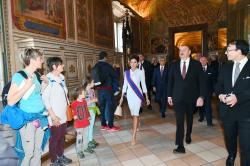