Held at the Baku Crystal Hall, the EYOF 2019 closing ceremony brought together Azerbaijan's First Deputy Prime Minister, chairman of the Organizing Committee of the 15th Summer European Youth Olympic Festival Yagub Eyyubov, Vice-President of the European Olympic Committees (EOC) Niels Nygaard, Mayor of the next host city of the festival, Slovakia's Banská Bystrica region Ján Nosko, heads of delegates of the participating countries and others.

The event takes place under the Olympic flag, and is rich with Olympic traditions: from the burning flame to athletes' and officials' oaths. It is at the EYOF that many of Europe's inspiring sports stars of tomorrow take their first steps on the international stage. And while some may enjoy EYOF as a stepping-stone to Olympic greatness, all who participate take home friendships and experiences to last a lifetime.

Baku 2019 featured seven days of competition in 10 sports at 12 competition venues, all of which are already existing, making this edition of the EYOF also one of the most sustainable. Wrestling joined the EYOF program for the first time this year.

Approximately 3,600 young people and their officials take part in the summer festivals, while there are around 1,600 participants at the winter editions. The competitions consisting of 10 sports (Artistic Gymnastics, Athletics, Basketball, Cycling, Handball, Judo, Swimming, Tennis, Volleyball, and Wrestling) involved over 2500 volunteers.

A total of 122 Azerbaijani athletes vied for medals at the European Youth Olympics Festival held in Baku from July 21-27.

The closing ceremony started with the performance of Azerbaijan's national anthem.

The parade of flags started in the arena where the flag of the Republic of Azerbaijan, as well as the flags of the EOC and the IOC was hoisted. The flag of Greece to honour the birthplace of the Olympics was brought to the arena first, which was followed by other teams in alphabetical order. The host country Azerbaijan concluded the parade.

The event then featured the screening of the film highlighting the most exciting moments of the 15th European Youth Olympic Festival.

Officials of the international and national Federations,

The 15th European Youth Olympic Festival, which has been held in conditions of good spirit, fair play and friendship for the last 7 days, comes to an end today. In my speech at the Festival's closing ceremony, I would like to share with you my sincere feelings. I feel proud of my country, my country's leadership and of all of you, dear friends, who have actively participated in these competitions. I am privileged that this Festival has been held at the traditionally high level, demonstrating once again that Azerbaijan is the country of sport. We love sport, because it is an influential and important tool for establishing friendship, peace and healthy life worldwide.

On behalf of the Organizing Committee and of all Azerbaijani athletes, we express our deep thanks to the Festival and to Mr Ilham Aliyev, President of the Republic of Azerbaijan, who has provided great support for the development of sports in Azerbaijan.

To you young people - as well as competing for over 900 medals in 10 different types of sport, you have, most importantly, demonstrated unity and friendship by your commitment to the ideals of the Olympic movement. In total, I wholeheartedly congratulate the Russian team which is the winner of the 15th European Youth Olympic Festival, and also those athletes of the United Kingdom and Turkey who won the second and the third places.

I would like to mention in particular that the Azerbaijani athletes achieved, in Baku, the best success in the history of their participation in the European Youth Olympic Festivals. In the overall team scores, they have gained the 4th place, including 10 gold, 7 silver and 6 bronze medals with total number as 23. On this occasion, I cordially congratulate the Azerbaijani people, athletes and coaches.

And, obviously, notwithstanding the results, I congratulate all the teams that have participated in the Festival. The participation in such competitions is also, in itself, another big victory.

I hope that the week you spent in Azerbaijan has left an indelible imprint in your lives, and that you will leave Azerbaijan with such feelings that all your lives you will remember these days in Baku – our beautiful capital city.

I thank all the coaches, doctors, technical officials and delegations for participating in the European Youth Olympic Festival, as well as the fans that came to watch the competitions.

The Festival, which we watched live, has become the first significant challenge for the majority of the young people present at the Festival. I am confident that there will be Olympic, World and European champions among you in the future, and we will be very proud to recall that the foundations of your success were laid down in Baku.

The 15th European Youth Olympic Festival is finished. In 2021, there will be another, 16th Festival in the city of Banská Bystrica, Slovakia. We are confident that those competitions will also be held at professional levels.

Dear friends and young people, we bid you our farewell, with the hope of seeing you again at future sporting events and competitions organized in Azerbaijan, and we say our very sincere 'thank you very much' to each of you for your participation in the Festival held here in Baku.

Dear friends and guests of the Olympic Movement of Europe,

Allow me to extend the warmest greetings of all the National Olympic Committees of Europe.

We had a great week here in Baku at the 15th edition of the Summer European Youth Olympic Festival.

It was a true celebration of European sport and our continent's best young athletes. After watching the athletes compete here, it is safe to say that Europe's leading position in the world of sport will not change any time soon.

Congratulations to all the athletes. I hope that your experiences here will inspire you to even greater heights in the future, both on and off the field of play.

You embraced the Olympic values of friendship, excellence and respect and we are proud of your performances, which we followed closely all week.

Thank you our Azerbaijani friends and organisers, who once again showed the world that you are capable of delivering excellent multisport competitions.

Thank you especially to the three-thousand five-hundred volunteers, who brought the Games to life with your smiles and generous assistance.

The EYOF are a celebration of youth and we are happy that so many young people were involved in these Games.

The local organizers did a terrific job reaching out to youth, including with its Olympic Culture and Education Programme that saw 49 schools in Baku twinned with counterparts across Europe.

Students shared aspects of their local culture, history, art, and sport with each other, while also learning about Olympic values and principles.

Their lessons and work were showcased at the Olympic Culture and Sport Pavilion inside the Athletes' Village, where young athletes, team members, and other guests could acquaint themselves with all participating European countries and engage with the Olympic spirit.

It is an excellent legacy project from these Games that helped bring the youth of Europe closer together.

Once again sport has proven how powerful it can be in connecting people from different backgrounds and beliefs together for peaceful competition.

Sagol, Baku, Sagol, Azerbaijan, for an unforgettable week of European sport and youth that we will always look back fondly on.

The flags of EOC and IOC were lowered to the accompaniment of the Olympic anthem. The IOC flag was solemnly carried out of the arena by Azerbaijani athletes, champions of the festival Khasay Hasanli, Hasrat Jafarov, Elmir Aliyev, Farid Sadikhli, Gurban Gurbanov and Turan Byramov.

The EOC flag was handed to chairman of the Organizing Committee of the 15th Summer European Youth Olympic Festival Yagub Eyyubov, who presented it to EOC Vice-President Niels Nygaard.

EOC Vice-President Niels Nygaard handed the flag to Jan Nosko, Mayor of Slovakia's Banska Bystrica region– the host city of the 16th European Youth Olympic Festival. National flag of Slovakia was raised to the accompaniment of the national anthem of the country.

In his remarks, Mayor of the Banská Bystrica region Ján Nosko said:

I have a good idea. I want to invite you to a place that has its charm. Even though it is tiny, it hides huge potential. I would like to invite you to a country where fewer people live than in New York City, but it gave the world a pop art father, an inventor of a parachute or a flying car. And athletes like Peter Sagan or Zdeno Chara. I have a good idea. I invite you to a country that hides love in its name. And since love is born in the heart, I invite you to the heart of this country. And do you know why? Because the city is located in the heart of Slovakia and it is close to everywhere, because it is a city of Olympic champions and world-famous athletes.

Football player Marek Hamšík, biathlete Anastasia Kuzminová and race walker Matej Tóth, these sports stars are at home in Banská Bystrica. And I invite all of you, the future sports stars to Banská Bystrica in 2021. I believe you will be enchanted. We are a picturesque city in the middle of the mountains, with the most beautiful square and city center of all Slovak towns.

Come to the heart of Europe in 2021. We are all looking forward to seeing you in Banská Bystrica, Slovakia. In 2017 we proudly received the title of the European City of Sport and in 2021 we will proudly carry the torch of the European Youth Olympic Festival. You are all invited!

The closing ceremony featured the screening of promotional film on Slovakia.

The event continued with an interesting concert program. 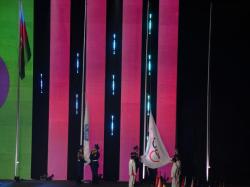