Baku has witnessed a charity bike ride "New year and Solidarity" dedicated to the New Year and the Solidarity Day of World Azerbaijanis, Trend Life reported.

Co-organized by the Cycling Federation, the Thalassaemia Federation, the Republican Association of Hemophilia and women's amateur cycling club "Ladıes on Bıkes", the charity bike ride started from the Azadliq Square and ended at the White City Boulevard - near the New Year tree.

The bikers dressed as Santa Claus and Snow Maiden greeted a large group of children on New Year and wished their dreams come true.

The President of the Republican Association of Hemophili,a Gulnara Huseynova, and the vice-president of Azerbaijan Thalassemia Federation, Fuad Rasul, thanked  all those involved in the preparation and organization of such a great event.

Later, all race participants were awarded with diplomas. 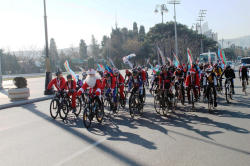