Azerbaijan's State Border Security Service and Mine Action Agency have made public details of recent demining operations on territories liberated from Armenia's occupation in a 44-day war with Armenia in 2020.

The State Border Service has stated that demining measures to create the necessary infrastructure for the border guard on the territories liberated from Armenian occupation are underway.

"Areas mined by the Armenian armed forces along the state border are being cleared by the State Border Service's engineering and fortification units. On January 31, 2021, the border sappers defused 120 anti-infantry mines near Malikahmadli village of Gubadli region," the State Border Service said in a report posted on its official website on February 2.

Meanwhile, Azerbaijan's Mine Action Agency said that from January 30 to February 1, it received 13 emergency calls on the discovery of shells on the territory of Aghjabadi, Fuzuli, Goranboy, Tartar, Khojavend regions, Ganja and Shusha cities.

Based on the received 13 calls, the agency's special mobile operational teams together with the Interior Ministry officers carried out 15 urgent and operational visits. During the search operations, 199 pieces of unexploded ordnance, 3 pieces of anti-personnel mines, 1 piece of anti-tank mine, 2,782 pieces of cartridges of various calibres, 8 pieces of detonators and 9 pieces of exploded shell remnants were found.

During the operational search activities,  1,448 hectares of lands were checked, more than 119 km of roads were cleared of mines and unexploded ordnance, and 296 buildings were inspected. The agency's demolition team destroyed 231 pieces of unexploded ordnance and 421 pieces of mines. Explosive Ordnance Risk Education Specialists conducted risk awareness sessions among  97,398 civilians.

As part of its special emergency operation carried out by the agency in the second-largest city of Ganja city on January 29, one piece of   F-1 and one piece of M-75 hand grenades were found and taken to the agency's central disposal area. In another joint operation by specialists from the agency and police officers in Ganja, an F-1 hand grenade was seized and transported to the agency's central disposal area. 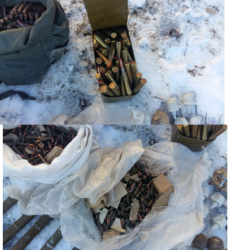