The books "Black Book of Karabakh" and "Karabakh-Towards Victory" have been presented at the International Mugham Center.

The books were presented within the IRS Heritage project  implemented by the Culture Ministry, Pasha Life Insurance, Azerbaijan Airlines (AZAL) and IRS Publishing House since 2013.

The event was attended by prominent public figures, representatives of culture, art and science.

The memory of the martyrs was honored with a minute of silence.

In his speech, the Culture Minister Anar Karimov stressed that Azerbaijani people waited for the liberation of the country's territories occupied by Armenia for almost three decades.

The Minister expressed his gratitude to the Azerbaijani Army which under the  leadership of  Supreme Commander of the Armed Forces, President Ilham Aliyev restored the country's territorial integrity.

Today a large restoration work is being carried out in these territories. Culture, traditions and customs are returning to Karabakh region.

The Culture Minister stressed the importance of informing the world community about the destruction caused as a result of the Armenian occupation.

The publication of these books is an important initiative in this matter.

Chairman of the Executive Board Pasha Life Insurance Niyaz Ismayilov, editor-in-chief of the IRS Heritage magazine Musa Marjanli spoke about the project.

Notably, new editions, attracting attention with their design and high artistic and aesthetic solutions, tell about the occupation of Azerbaijan's territories by Armenian invaders.

Around 17 books, including "Dreams of an ancient fortress", "Gobustan - the book of millennia", "Tales of the magical Tabriz, "Nakhchivan - the legend of the East", "Enchanting city", "Baku  symphony", "Karabakh-Chronicle of Centuries", "Hello, Azerbaijan!", "Shaki-Magic of Beauty", have been already published as part of the project aimed at promoting Azerbaijan's  cultural heritage. 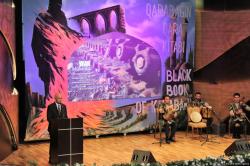