The 2nd Azerbaijan International Festival of Vocalists has opened in Baku.

The opening ceremony took place in the Philharmonic Chamber and Organ Music Hall.

The large-scale event is organized by the Heydar Aliyev Palace with the Culture Ministry's support.

In his speech, Ramil Gasimov stressed that the festival is a major event in the country's cultural life.

He recalled that the first festival of vocalists was held in 2019. This year, the festival has acquired an international status.

"The Festival of Vocalists aims to develop and promote classical music in Azerbaijan. The project also focuses on the formation of good musical taste among young people. I believe that this festival will be met with great interest and will turn into a real feast of music," Gasimov said.

The State Chamber Orchestra under the baton of Honored Artist Ayyub Guliyev performed at the festival's opening ceremony.

The first music piece performed at the evening was the overture from the opera Orpheus and Eurydice by Christoph Willibald von Gluck.

Next, the vocalists presented thrilled the listeners with solo and duet parts from operas and works by Antonio Vivaldi, Giovanni Bononcini, Georg Handel, Giovanni Battista Pergolesi, Henry Purcell, Alessandro Scarlatti and others.

After the concert, Honored Artist, conductor Ayyub Guliyev shared his impressions with Trend Life.  The State Chamber Orchestra performed under his baton for the first time.

"The first festival had a very big resonance. And it is especially valuable for us that the project has acquired an international format in 2021. Famous opera soloists from foreign countries have been invited to participate in the festival. For the first time, the director of the Ankara Opera House, famous singer, soprano Feryal Turkoglu, soloist of the Ankara Opera House, baritone Umut Kosman, as well as talented Serbian soprano Marija Jelich. I would like to emphasize that the geography of the festival is expanding, new ties are being formed," said Guliyev.

Meanwhile, the festival's clothing ceremony will be timed to coincide with the International Opera Day.

"This is a great holiday, an event of tremendous importance for opera artists, conductors. This day is celebrated in many countries, but in Azerbaijan it has not been celebrated before. The Azerbaijan State Academic Opera and Ballet Theater is a member of the Opera Europe Association. At the conference held by the association, I suggested celebrating the International Opera Day in Baku," he added.

Notably, the Association has its own virtual platform OperaVision with a multi-million audience, which broadcasts major cultural events and spectacular performances.

The festival's final concert will be aired on the platform. The closing ceremony will take place at the Heydar Aliyev Palace on October 20.

Along with famous artists, a young vocalist, soloist of the orchestra of the Training and Education Center under the Azerbaijan Armed Forces Jalal Karimov performed at the baroque music evening.

Speaking about the event, the musician said that its a great honor for him to participate in such a large-scale international festival of vocalists. He expressed his gratitude to organizers for holding such project. 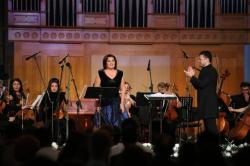