A press conference has been held in Baku ahead of the 2nd ANIMAFILM Baku International Animation Festival.

Speaking about the festival, ANIMAFILM’s director Rashid Aghamaliyev said that not only well-known animators, but also kids will evaluate the competitive works at the 2nd ANIMAFILM Baku International Animation Festival, Trend Life reported.

"This year, the festival presented a number of innovations. Along with a professional jury, the organizing committee of the festival formed a jury that included kids. The selection of children in the jury was carried out by the famous Azerbaijani animation director, Honored Worker of Culture Elchin Hami Akhundov, Aghamaliyev said.

The 2nd ANIMAFILM Baku International Animation Festival will start its work with a large conference devoted to Azerbaijani animation - its past and present. Moreover, the festival's program includes films by jury members.

In addition, a workshop will also be held for kids. As part of the workshop, French and Greece teachers will reveal all secrets of animated films.

In conclusion, Rashid Aghamaliyev expressed his hope that the festival will turn into a holiday for both kids and art figures who work in the field of animation.

Honored Culture Worker Elchin Hami Akhundov said that members of the kids jury were trained on how to evaluate the entries.

"This year we decided to form a jury, which will include kids. We have received many requests from children and their parents, of which we selected five members of the jury.

Training was held with kids, where we explained them what they should pay attention to when viewing and choosing works, and how to evaluate according to the point system," he said.

Notably, young jury members will evaluate only the animated films by kids.

Famous animation director Masud Panahi (Germany), who will head the international jury of the festival, emphasized that this project is a big step forward towards developing animation in Azerbaijan.

"The 2nd ANIMAFILM Baku International Animation Festival has received applications from 50 countries which indicates that the geography of the festival participants is increasing. I hope that it will be even greater next year," said Panahi, the director of popular animated film Tik-Tik khanim.

The director of TV series "Smeshariki" emphasized that holding the ANİMAFİLM festival has become a good tradition.

"I am glad to attend the second festival. I hope this project will continue in the future. Thanks to the hard work of Rashid Aghamaliyev, the festival is held for the second time. The festival program is very good, I invite everyone to the film screenings," he said.

The 2nd ANIMAFILM International Animation Festival which started in Baku on October 18, will run until October 20 with the support from the Azerbaijan Union of Filmmakers (keypartner), Embassy of the Czech Republic in Azerbaijan and the Institut Français in Azerbaijan.

A number of international and local animated films will be presented to children and adults during the three days of the festival. This festival is an annual event promoting the art of animation that started with the 1st ANIMAFILM International Animation Festival in 2018.

The international jury is headed by Masud Panachi, famous Azerbaijani director and animator. The jury is composed of professionals from Germany, Azerbaijan, Russia, Iran, and the Czech Republic.

Everyone can vote for his favorite animated film on the festival's website.  As the result of the voting, "Audience Award" will announce the winner. 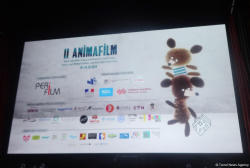 Music therapy to be held at YARAT [PHOTO]