The world famous Azerbaijani jazz singer, pianist and composer Aziza Mustafazade together with her Trio will give a “From Azerbaijan” concert in Real Teatro Santa Cecilia in Palermo (Italy) on March 2.

"Aziza is from Azerbaijan and an international star. For twenty years she has been one of the most original and insightful performers of mixed jazz genre, which includes ethnic motifs of Azerbaijani jazz mugam traditions with classical and avant-garde. She not only has a unique vocal talent, but is also a pianist with a great technique and improvisational fantasy. Aziza is a genius, as a composer and performer," said great guitarist Al Di Meola.

The Brass Group, organizers of the Fondazione evening, said that it is no coincidence that in May last year, she opened the Piano City Milano.

Aziza recalls the story that her mother told her: “Once, my father was improvising at the piano playing in the mugam mode known as Shur, which creates a mood that evokes very deep, sad emotions. As my father was playing, I started to cry. Everyone wondered what was happening to me. Why was I crying? And then mother realized the correlation between my feelings and the music. “Vagif, please,” she told my father, “change the scale. Go to Rast. Play Rast.” And he did. Now Rast is characterized by its joyfulness and optimism. And sure enough, with tears still running down my cheeks, I started to make dance-like movements. And Mom pointed out, “Look, look what she's doing! Change back to Shur!” And when he did, I started crying again louder than before. At least, that's what they tell me. Back to Rast, and I began dancing again.”

In 1986, during the International Jazz Festival in Tbilisi, Aziza was awarded the gold medal, which was a worthy beginning of her creative work. At the age of just 17, she won the competition of pianists named after Thelonious Monk in Washington. In Europe she gained titles of the ‘Eastern diva’, ‘Scheherazade at the piano’ and ‘Princess of Jazz’. After the concert in 1997 in the Queen Elizabeth Hall, she was awarded the title of Queen of Jazz, which she retains till today. 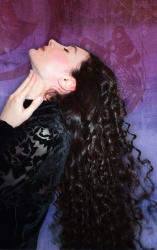