People’s Artist of Azerbaijan, Laureate of the Order "Shohrat" awarded the gold medal "Roses of the world" of the World Academy of Art and the International Humanitarian Academy "Europe-Asia" operating at UNESCO.

The award was presented to the artist in the nomination "Peace".

The awarding ceremony was held on September 28 in the hall of the Academic Council of the Azerbaijan State University of Culture and Arts.

The special guest of the ceremony was the President of the World Art Academy "New Era", academician, professor of the UNESCO Institute of Culture, member of the International Humanitarian Academy "Europe-Asia" and the World Association of Artists, People's Artist of Russia Anatoly Silov.

Note that the gold medal "Roses of the World" is awarded to UNESCO by scientists and artists who play an important role in the field of education and enlightenment, the development of world art and international cultural relations.

The gold medal "Roses of the World" presented to Arif Aziz is the result of the artist’s contribution to the development of Azerbaijani national and world fine art.

Talented master of pencil, full member of the UNESCO’s International Art Academy, goodwill ambassador, prominent man of art, professor Arif Aziz is one of the most famous, well-known persons of the modern Azerbaijan art.

He painted numerous posters, ex-libris, logos, design sketches, as well as illustrations for children’s books during the graphic period in the early stage of his work.

Advertisement posters created by artist during are also noteworthy. These posters served not only as propaganda, but were also distinguished with their interesting composition and colour solution. In 60-70s of the 20th century "photo-realism" mood was dominating the poster art, which hindered the application of creative opportunities of the poster in full. 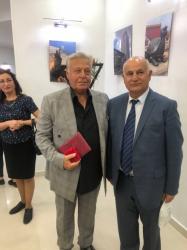