A tunnel that will connect the ‘November 8’ station of the ‘purple line of the Baku metro with the B-04 (temporary name) station has already been built, Chief Engineer of the Construction Department of Baku Metro CJSC Yagub Musayev told Trend.

“The ‘wall in the ground’ method is used during the construction of the station. It consists in the fact that the walls of the excavated pit are concreted as it deepens,” Musayev said.

"Currently, the construction of the new station is being carried out in three shifts at a site with difficult geological conditions," he said.

Construction of a new B-04 station of the ‘purple’ metro line has begun in Baku. It will be located on Jalil Mammadguluzade street, on the territory of the Heydar Aliyev Sports and Concert Complex. 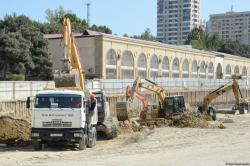