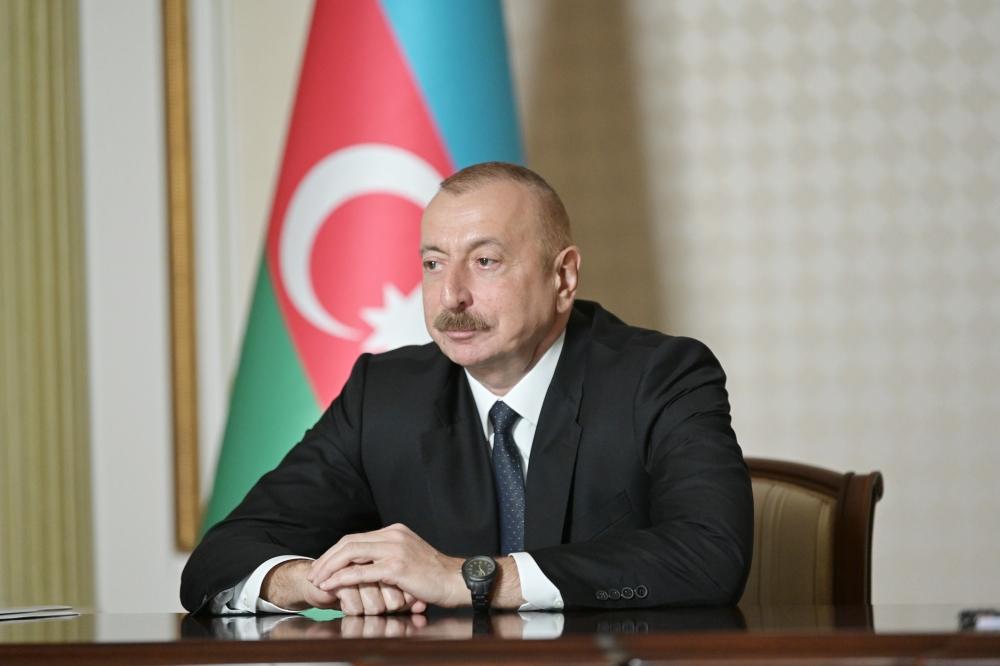 Azerbaijani President Ilham Aliyev has said that as a country located between Asia and Europe, Azerbaijan makes a significant contribution to the transport and logistics sector in Eurasia.

“Azerbaijan has established itself as a reliable transit country in the world arena. Our country has become one of the most important new transport and logistics centres in Eurasia,” Aliyev said.

Commenting on Baku-Tbilisi-Kars railway that was put into operation in 2017, Aliyev said that this railway is called the "Iron Silk Road” and connects continents.

“The volume of cargo transported by the Baku-Tbilisi-Kars railway in the first six months of 2020 is 3.7 times higher than the same period in 2019,” Aliyev said.

The president emphasized that a modern transport and logistics infrastructure has been created as a result of large investments in Azerbaijan’s transport sector.

In this regard, Aliyev reminded that in 2018, the Alat International Sea Trade Port with a capacity of 15 million tons of cargo and 100,000 containers was put into operation.

“In the future, the capacity of this port can be increased to 25 million tons of cargo and 1 million containers,” he noted.

The president underlined that Azerbaijan has the largest fleet of 260 ships in the Caspian Sea, noting some facts: 10 ships have been built and 140 ships and platforms have been repaired at the modern shipyard operating in Azerbaijan since 2013.

Aliyev said that 2 Ropaks ferries and 3 oil tankers are currently under construction at the plant.

“It is planned to build additional ships in 2021. These ships will serve to increase cargo transportation through the Caspian Sea.”

Aliyev also emphasized that at the same time, Azerbaijan attaches great importance to the development of roads.

Speaking about the upgrading of railway infrastructure in Azerbaijan, Aliyev referred another report of the Davos Economic Forum about transport.

The president also touched upon the East-West transport corridor, saying that it is already fully operational. Regarding that, Aliyev highlighted some important facts:

Noting his official visit to Turkmenistan in November 2018, Aliyev reminded that during the visit, out of 21 documents signed, 9 documents are related to the transport sector.

“In the first half of 2020, more than 1.5 million tons of cargo was transported to and from Turkmenistan at the Alat International Sea Trade Port. This is 28 per cent more than in the same period last year. The volume of dry cargo increased by 7.7 times and exceeded 370,000 tons. The Turkmen side has been invited to participate in a consortium to manage the fertilizer terminal to be built in the port.”

“After the connection of the Lapis Lazuli route with the Baku-Tbilisi-Kars railway in 2018, cargo from Afghanistan has already started to be transported from Turkmenistan to Azerbaijan, and then to the West. In December 2018, the first test shipment from Afghanistan was delivered to the port of Baku within 12 days.”

Aliyev also noted that Azerbaijan also cooperates effectively with Afghanistan and Turkmenistan in a multilateral format.

“Our countries always support each other's territorial integrity, sovereignty and inviolability of borders within international organizations.

He stressed that during the pandemic, solidarity and cooperation between countries and within international organizations is important.

“Despite the negative effects of the pandemic, Azerbaijan has taken additional measures to transport transit cargo. International cargo transportation through the East-West transport corridor is carried out without interruption”.

“We must continue our efforts to further increase the capacity of the East-West transport corridor. It is important to unify tariffs to optimize freight”.

“Despite the negative effects of the pandemic, Azerbaijan has taken additional measures to transport transit cargo. International cargo transportation through the East-West transport corridor is carried out without interruption”.

Aliyev noted that the European Union's interest in the East-West transport corridor is growing.

“Donald Tusk, President of the Council of the European Union, who visited Azerbaijan in July 2019, visited the Alat International Sea Trade Port and got acquainted with the port's capabilities. Several European countries have already joined the corridor. Other partner countries are also showing great interest in cargo transportation through the corridor,” said he.

“European and Asian countries are participants in the East-West transport corridor. I think that the topic of today's meeting, transport and logistics, can be the first step towards practical cooperation between the European Union and the Non-Aligned Movement”.

“I think we can instruct the relevant government members to set up a working group on all sides and cover all the issues we discussed - energy security, oil, oil products and gas supply, the unification of tariffs, customs regulations, new ideas on investment opportunities,” said the president.

“So, we are ready. Issues related to the fibre-optic cable line between Turkmenbashi and Siyazan - this can then be extended to Europe and through Afghanistan to your neighbours. I think we can look at the proposals and approve them, give all the necessary instructions and move this process forward,” Aliyev concluded.

"This meeting is useful in terms of discussing the current state and future development of our cooperation,” said Aliyev.

“We have contributed to peace and stability in Afghanistan by providing military force, multimodal transit, training and financial assistance. The number of peacekeepers in Azerbaijan's Resolute Support mission has increased by 30 per cent in 2018 to 120 people”. Azerbaijan to establish embassy in Afghanistan