The film director Jalaladdin Gasimov got all the information about the Shollers from his father.

Earlier, "Sholler's Archive" was named the Best Feature Film, while "The First Success of Nobel Brothers" was selected as the Best Documentary Film at the Under the Stars International Film Festival in Italy.

Established in 2003, Accolade Global Film Competition is an avant-garde worldwide competition that strives to give talented directors, producers, actors, creative teams and new media creators the positive exposure they deserve.

It discovers and honors the achievements of filmmakers who produce high quality shorts and new media. The Accolade promotes award winners through press releases to over 40,000 filmmakers, industry contacts and additional international media and distribution outlets. 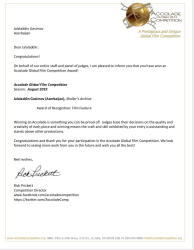 Film about great philanthropist to be shown in Portugal