A creative room dedicated to the prominent Azerbaijani film director Huseyn Seyidzade, where he once worked, has opened at Azerbaijanfilm Studio.

Addressing the event, director of the Azerbaijanfilm Studio Mushfig Hatamov stressed that the studio’s building is not only a production area but also a big cultural center, Azertag reported.

"As you know, there was an opening ceremony of the rooms where prominent directors Rasim Ojagov and Tofig Tagizade worked. These venues, which act as museum-rooms in the film studio, serve to create an understanding of the working process of the prominent artists, as well as to perpetuate their memory,” he said.

Hatamov added that in the near future it is planned to open the creative rooms of great Azerbaijani filmmakers Hasan Seyidbayli, Alisattar Atakishiyev and actress Leyla Badirbeyli.

“They are special people in Azerbaijani cinema and we will continue this tradition," he said.

"Although Huseyn Seyidzade was invited to work in other countries, he preferred to serve his people. He spent nine months working hard on the script of the movie "The Unbowed Battalion" based on the novel "Rebellion in the Castle" and shot the movie in the end. This is an indication of how Huseyn Seyidzade was sensitive to his work," said Kazimzade.

People's Artist, director Ogtay Mirgasimov, in turn, emphasized that each film director can be considered extraordinary, because this profession does not love the standards.

"But the fact that Huseyn Seyidzade was so distinguishing is a rare event in the history of Azerbaijani cinema. I watched his movies several times, repeatedly," said Mirgasimov.

"When we were talking to students studying cinema, I advised them to watch our movies. The montage of Huseyn Seyidzade's films, aesthetic purity of the frame, the actors' play, all this showed what a great director he was. In his films, we see real human drama along with the forces of justice and injustice, the clash of good and bad intentions," he added.

Film expert, Honored Art Worker Ayaz Salayev spoke about the importance of the Azerbaijanfilm studio in the history of cinema in Azerbaijan.

"I am pleased that the tradition of the film studio’s "memory rooms" continues. Everybody should know that the walls of this studio are sacred. Azerbaijanfilm studio should become one of the cultural centers of our country such as R.Mustafayev State Art Museum, State Academic Philharmonic Hall and Baku Music Academy, because hundreds of directors, cameramen, artists and actresses worked in this building," said Salayev.

Huseyn Seyidzade graduated from the Gerasimov Institute of Cinematography in Moscow. He was taught by great Soviet film directors such as Sergei Eisenstein, Mikhail Romm and Lev Kulidzhanov.

Seyidzade directed his first film in 1943, with Leyla Badirbeyli in the leading role. The film entitled “Ayna” was dedicated to the World War II.

His film "If Not This One, Then That One" is considered one of the most famous and successful cinematographic pieces in the history of the country`s movie industry.

The movie, based on the 1910 operetta by Uzeyir Hajibeyov was released in 1956.

The film criticized backward traditions and celebrated emerging modern lifestyles. It was translated into many languages and within the next 3 years was shown in more than 40 countries. 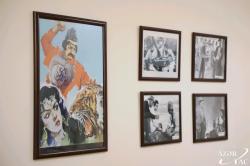 Memory of prominent film director to be honored in Baku