The 11th Gabala International Music Festival has opened its doors to music lovers.

The festival is held from July 31 to August 5, with the organization of the Heydar Aliyev Foundation and the support of the Ministry of Culture and Gilan Holding.

At the festival's opening ceremony, a congratulatory message of Mehriban Aliyeva, the First Vice President of Azerbaijan, President of the Heydar Aliyev Foundation, UNESCO and ISESCO Goodwill Ambassador, who has exceptional merits in the development and promotion of the country's musical culture, was read out to the festival participants.

In the letter, Mehriban Aliyeva wished success in the work of the festival. She noted that culture at all times was the main means of communication between peoples and a reliable bridge of interconnections between civilizations.

“And today, the relationship of world cultures is important in the life of modern society, socio-political processes in the world and inter-civilizational dialogue. Without taking this factor into account, it is impossible to feel the fruitfulness of international relations and cooperation between nations,” Mehriban Aliyeva noted.

The letter said that Azerbaijan historically made efforts to mutually enrich different cultures, further strengthen the unity between nations. International cultural relations, mutual cultural integration are one of the main priorities of the interstate policy of Azerbaijan. It is no coincidence that important international events are regularly held in Azerbaijan - forums, conferences and festivals.

“As part of the Baku Process, launched by Azerbaijan, which has turned into a truly global platform to promote intercultural dialogue, we held the 5th World Forum on Intercultural Dialogue in April this year. The 43rd session of the UNESCO World Heritage Committee was held in Baku in June. The session is remembered as a significant event - located in one of the most ancient cities of Azerbaijan, the Shaki Khan Palace, together with the historic center of Sheki, was included in the UNESCO World Heritage List,” Mehriban Aliyeva noted.

She added that the Gabala International Music Festival, whose authority is increasing every day, is known as a significant event that makes a great contribution to intercultural dialogue. This holiday of friendship and music with the participation of a large number of musicians from different countries serves to identify new talents, exchange knowledge and research in this area, and promote intercultural dialogue.

Speaking at the opening ceremony, the chairman of the Council of Elders, MP Fattah Heydarov said that the festival is already known worldwide for its significance.

"The festival is of great importance not only in expanding cultural ties, but also in establishing friendly and fraternal bonds between people, high cultural relations between states. Today, guests from the farthest countries of the world - China, the U.S., the UK, Germany, France, Eastern countries, Turkey, Iran - came together at the festival," said Heydarov.

He added that the Gabala Festival is one of the cultural events that have achieved great success in the life of Azerbaijan.

Rector of the Baku Music Academy named after Uzeyir Hajibeyli and the festival's artistic director Farhad Badalbeyli noted that the 11th Gabala International Music Festival coincided with the events dedicated to the 650th anniversary of Imadedin Nasimi. He stressed that this anniversary is a major event in the country's cultural life.

A diverse program was prepared for the listeners, in which the works of Azerbaijani and foreign composers were performed. The audience greeted Fikrat Amirov's “Azerbaijani Capriccio” with a storm of applause.

Three fragments from "Romeo and Juliet" ballet by Sergei Prokofiev, cavatina from the "Aleko" opera by Sergei Rachmaninov, aria of Musetta from Giacomo Puccini`s "La Boheme" opera, aria of Mardan from Gara Garayev`s "Motherland" opera and other works sounded at the concert.

Works of A. Scriabin, F. Chopin, Garayev, E. Grieg, P. I. Tchaikovsky, A. Arensky, etc will sound at the evening.

The Kyiv Virtuosos Symphony Orchestra and Flamenco Ensemble will also take part in the festival.

Baku Chamber Orchestra will please music lovers on August 4. The orchestra will be conducted by Farhad Badalbayli. The soloist of the evening will be famous pianist, People's Artist Murad Adigozalzade.

The Virtuosos of Kyiv Symphonic Orchestra will perform under the direction of Argentine conductor Yeruham Scharovsky.

The concert program will feature arias from the operas "The Barber of Seville", "The Dead City", "Rigoletto", "The Power of Fate", "La Traviata", "Romeo and Juliet", "La Boheme", etc.

The operas performance will be conducted by Alvis Caselli (Italy). The soloists of the evening will be Maria Buinosova (Russia), Umid Idrisov (Uzbekistan), Modestas Sedlevicius (Lithuania). 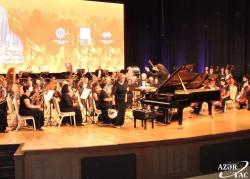