The second semi final of Eurovision 2018 took place at the Altice Arena in Lisbon on May 10.

The final result was determined by a combination of televoting and professional jury results.

Eighteen  countries performed in the second semi-final but only 10 countries qualified for the final.

The acts that have been successful in this semi-final include Serbia, Moldova, Hungary, Ukraine, Sweden, Australia, Norway, Denmark, Slovenia, and the Netherlands, esctoday.com reported.

The allocation draw for the final will take place soon, and then shortly after that we will know the full running order for the final.

The Grand Final will take place on May 12 in Lisbon.

A total of 26 countries will be performing in the Eurovision Song Contest grand final.

Azerbaijan at Eurovision Song Contest 2018 was represented by Aysel Mammadova. She represented Azerbaijan with the song X My Heart.

Four backing singers, all dressed in white, joined Aisel on stage. The singer had a powerful song and a mesmerizing performance.

Unfortunately, AISEL dropped out of the fight for the main prize of the largest international music contest.

Eurovision Song Contest 2018 is taking place for the first time in Portugal following the country's first victory at the 2017 contest in Kiev, Ukraine with the song "Amar pelos dois", performed by Salvador Sobral.

The creative theme and logo of the competition are closely linked to the history of Lisbon and the special location of Portugal, which connects the Atlantic Ocean with the rest of Europe. 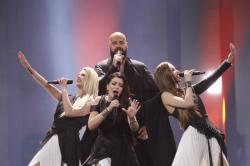