An exhibition dedicated to the memory of artist and animator Nazim Mammadov opened in Art Tower gallery on December 6.

The event is organized by the Ministry of Culture and Tourism, the Office of the State Historical and Architectural Reserve "Icherisheher" and the NGO Arts Council Azerbaijan.

Guests of the exhibition, including cultural figures, representatives of creative youth and diplomatic missions, looked with great interest at each painting created by the master of brush. Artist's paintings are a reflection of his soul, a colorful and vivid hymn to color.

His artworks are characterized by juicy and bright colors that give the viewer a sense of a waking tales and immerse him in the wonderful world of the author's fantasy.

The daughter-in-law of the late artist, Sona Guliyev, on behalf of the family expressed gratitude to all those present for their attention to the artist's memory and his creative heritage.

The exhibition will last until December 10. Admission is free.

Nazim Mammadov's name is inextricably linked with the most beloved domestic cartoons. Being the creator of the first Azerbaijani cartoons, Mammadov made a great contribution to the development of animation in Azerbaijan.

He graduated from the Art School named after Azim Azimzade and animated courses at the Soyuzmultfilm studio in Moscow. Then, he started working as a director-animator at the film studio "Azerbaijanfilm" named after Jafar Jabbarli.

His first animated film ‘The Bear and the Mouse’ was shot in 1970. Mammadov took part in the shooting of 40 documentaries at the studio "Azerbaijanfilm". In 1988 he created the country's first animated opera in five parts of "Beautiful Fatma".

The author of the first Azerbaijani cartoons also studied easel painting, graphics, book children's illustrations. His paintings are widely known both in Azerbaijan and abroad. 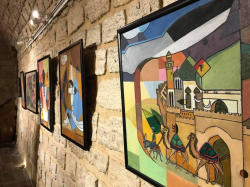