The closing ceremony of the 35th European Rhythmic Gymnastics Championships was held at the National Gymnastics Arena in Baku on May 19, Trend reports. 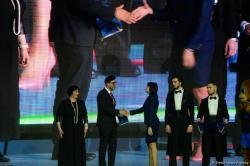