For the first time in Baku, the FIG Acrobatic Gymnastics World Cup will be held at the National Gymnastics Arena on November 17-18.

The competition will bring together athletes from Belarus, Israel, Kazakhstan, India, Russia and Ukraine.

Silver medalists of the World Age Group Competitions (2016) - Seymur Jafarov and Murad Akparov will compete for the best places within the Men's Pair.

The traditional “AGF Trophy” Cup will also be presented to Pairs and Groups having received the highest scores at the events.

Azerbaijan Gymnastics Federation, which was founded in 1956, has experienced revival since 2002 and the renewed federation lifted this popular sport to a new level. Currently, AGF comprises seven gymnastics disciplines recognized by the International Federation of Gymnastics (FIG).

The National Gymnastics Arena, which specializes in all six competitive gymnastics disciplines and has hosted all large-scale competitions held in Baku from the day of its opening in 2014, is in the spotlight of not only gymnasts, who willingly joining the training camp, but also of all the sports fans from different countries of the world. 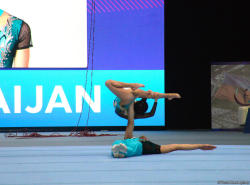