Schneider Electric, a global expert in energy management and automation, has announced the opening of an office in Uzbekistan.

Now, a representative office of the company will operate in Tashkent, where a project for assembling high-voltage and low-voltage switchboard equipment at the production site of IE Energo System NVA LLC has been implemented jointly with partners.

A business conference was timed to the event. Deputy Minister of Economy and Industry of Uzbekistan Botir Usmonov and French Ambassador Violaine de Villemeur shared their vision of the digital development of the country.

A day before the event, leaders of Schneider Electric and the Minister of Economy and Industry of Uzbekistan Botir Khojaev held a meeting.

Johan Vanderplaetse, President of Schneider Electric in Russia and the CIS, noted that the company is planning a long-term development of relations with Uzbekistan. He considers this is a promising, dynamically developing region that has entered the path of openness, modernization and increasing its industrial potential.

"Our technologies, solutions and specialists will help many companies to implement complex investment projects and to realize the ambitious plans of the state for a deep modernization of the economy and increasing the level of digitalization," said Vanderplaetse.

In turn, the leaders of Schneider Electric spoke about the results and development plans, as well as the decisions, the use of which will contribute to more efficient development of the energy, oil and gas, transport, industrial and construction industries of Uzbekistan.

Armen Badalov, Vice-President for Strategy, Innovation and Regional Development of Schneider Electric JSC Russia and CIS said that today Uzbekistan is a strategically important market for Schneider Electric, which is confirmed by company’s investments in the further expansion of production. 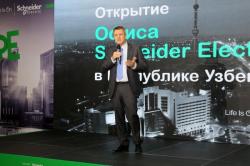