National hero Koroglu may be included in UNESCO list 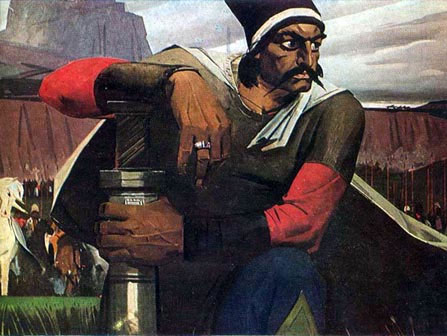 Koroglu (The Blind Man's Son), an Azerbaijani folk hero, may be included in the UNESCO World Heritage List.

According to the head of the Turkish municipality Bolu, Alaaddin Yilmaz, Koroglu's inclusion in the list is on the agenda at present, the Turkish newspaper "Bu gun" reported.

"In this regard, negotiations are underway with UNESCO," he said.

According to Yilmaz, Azerbaijan, Kyrgyzstan, Turkmenistan, Uzbekistan and Kazakhstan will work along with Turkey on the inclusion of Koroglu, who lived in the 16th century, in the UNESCO World Heritage List.

"The Western hero Robin Hood is known around the world. Koroglu also has to be known by the whole world. It's our great historical responsibility to the future generations," he said.

Yilmaz said a park of Koroglu will be set up in Bolu over 90,000 square meters. A 25-meter high monument of the hero will be installed in the park, and it will be visible from anywhere in Bolu. A museum of Koroglu is also expected to be created in the park.

The national Koroglu epos, which is widespread in Azerbaijan, the Caucasus, Central Asia, Turkey, and Iran, is a heroic legend that is prominent in the oral tradition of the Turkic nations.

The legend describes a hero who seeks to avenge the wrong. It was often put to music and played at sporting events as an inspiration to the competing athletes. Koroglu is the main hero of the epic with the same name in Azerbaijani and Turkish as well as some other Turkic languages.

The epic tells about the life and heroic deeds of Koroglu as a hero of the people who struggled against unjust rulers in the 16-17th centuries.

There are many options of the epic of Koroglu in a number of Turkic languages and it is common to several different cultures. The story has been told for many generations by the ashugs of Azerbaijan and Turkey.

Intellectuals turn to UNESCO over destruction of Azerbaijani heritage in Armenia

Armenia to terminate powers of UNICEF representative in country