Working trains have begun running to Mahmudlu station in Jabrayil region liberated from Armenia's occupation in 2020, the Azerbaijan Railways have reported.

The working group on transport, communication, and high technologies of the interagency center under the Coordinating Staff, established to centrally solve issues in Azerbaijan's liberated territories, reported that the construction within the first phase of the Horadiz-Aghband railway project, which is an important part of the Zangazur corridor, is already 70 percent complete.

Rails of a total length of 23 km have been laid to the Mahmudlu station, and construction has begun. The Horadiz-Aghband railway line, whose foundation was laid by Azerbaijan's president in February 2021, is 110.4km long, according to the statement.

In the first stage, 90 percent of the excavation work has already been completed, as have 40 culverts, nine bridges, four animal crossings, and 52 spare crossings. The track structure was installed on a 23-km section of road.

As a result, the necessary conditions for the movement of working trains from the Fuzuli region's Horadiz station to Jabrayil region's Mahmudlu station were established.

Furthermore, it should be noted that the design and construction work is done concurrently with the demining process. Currently, more than 60 kilometers of land have been cleared of mines. A 50-km section of design work has been completed.

All work on the project is planned to be completed in 2023.

As a grand strategic project, the railway will make a significant contribution to the economic potential of the liberated territories, and as an integral part of the Zangazur corridor, the project will establish direct transport links between the Nakhchivan exclave and Turkey that ultimately will boost Azerbaijan’s economic importance.

The railway will be of great importance both for the movement of citizens and the transportation of goods to the liberated lands. 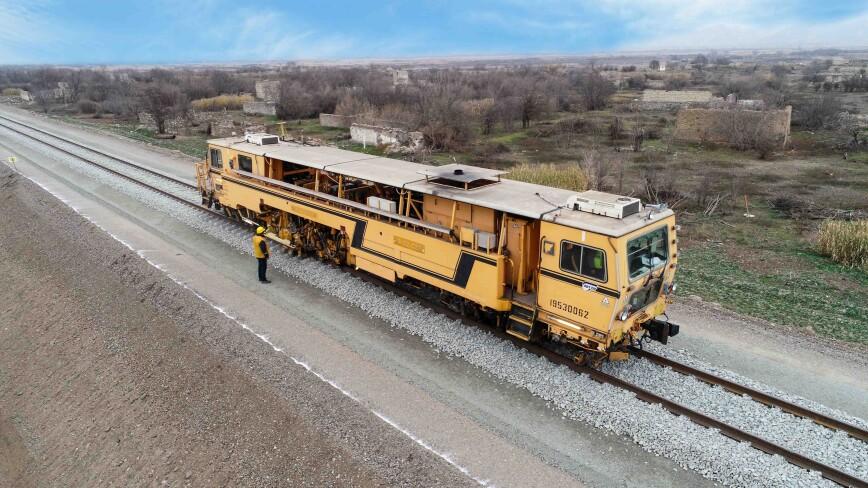