Azerbaijan to normalize ties with Armenia based on int'l law [PHOTO] Foreign Minister Jeyhun Bayramov has said that Azerbaijan can normalize relations with Armenia on the basis of respect for the principles of international law, in particular sovereignty, territorial integrity, and inviolability of borders.

He made the remarks at a meeting with the delegation led by Estonian-Azerbaijani InterParliamentary Group Chairman Sven Sester on November 1.

Sester underlined Estonia’s unequivocal position on respecting the sovereignty and territorial integrity of Azerbaijan. He emphasized the importance to provide minefield maps for the rapid development of the liberated lands.

The chairman added that they will visit the liberated territories to familiarize themselves with the situation and the reconstruction carried out by Azerbaijan.

Bayramov thanked Estonia for supporting Azerbaijan’s territorial integrity within its international borders.  He briefed on the problems stemming from the trilateral statements of November 10, 2020, and January 11, 2021, as well as the threat of landmines in the region.

The parties discussed the demining activities, the reconstruction in Karabakh, infrastructure projects, and other issues that are currently underway in Azerbaijan’s liberated lands.

Bayramov noted the high-level cooperation between the countries.

He stressed that next year will mark the 30th anniversary of the establishment of diplomatic relations between the two countries. The minister underlined the importance of expanding trade and economic cooperation between Azerbaijan and Estonia.

The trade turnover between the two countries amounted to $4.8 million in the first nine months of 2021. 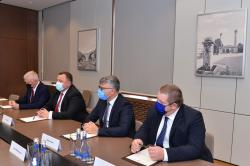