The trip of the delegation of the Cooperation Council of Turkic-speaking States (Turkic Council) to Azerbaijan’s Aghdam district (previously liberated from Armenian occupation) continues, the Karabakh bureau of Trend reports.

At first, the participants visited the 'Imaret complex', which houses the palace of the founder of the Karabakh Khanate, Panahali Khan. The guests were met by the special representative of the President of Azerbaijan for the liberated part of the Aghdam district, Emin Huseynov.

The members of the delegation were informed about the palace complex, which was subjected to Armenian vandalism. They examined the destroyed graves, were informed in detail about the monuments located on the territory of the complex. 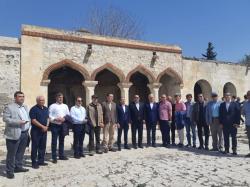