The Azerbaijani servicemen have successfully completed the military course in Turkey’s Isparta city held within the agreement "On cooperation in the field of military education" signed between Azerbaijan and Turkey, the Defence Ministry has reported.

Addressing the ceremony held on this occasion, Lieutenant Elsevar Aliyev, who became an excellent student of the course and spoke on behalf of the cadets, expressed readiness to successfully complete the most difficult combat missions.

Aliyev installed the graduation emblem on the memorial plaque, presented certificates and gifts to the graduates.

At the end of the event, the graduates marched in front of the podium, took a photo for memory.

The two countries have established close military cooperation since1992, with an agreement signed between the Azerbaijani and Turkish governments on military education and weapon equipment and deals to help strengthen the bond between the two nations. 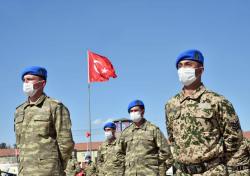 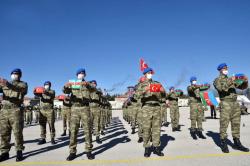