The Operations and Investigation Department of the Southern Territorial Main Customs Office of Azerbaijan has seized 545 kilograms and 105 grams of heroin smuggled from Iran and bound to Europe, the Customs Committee said on 3 June.

The operation to stop the smugglers was carried out after the Southern Territorial Main Customs Office received information that a large number of drugs hidden in a Mercedes-Benz truck allegedly carrying melon will be smuggled from Iran to Ukraine’s Kharkow city.

During the inspection, the customs officials revealed 526 packages hidden in 720 boxes in 10 pallets in the truck driven by an Azerbaijani citizen. These pallets have been removed from under the "melon" collected for use as "cover goods". Heroin, a light brown drug with a specific odor, weighing 545 kilograms and 105 grams, has been found in the packages.

The driver was detained on suspicion of committing crimes and charged under the relevant articles of the Criminal Code of Azerbaijan.

Earlier, on June 1, the same customs department's officials seized 281 kilograms and 435 grams of heroin smuggled from Iran and bound to Europe.

It should be noted that the Azerbaijani customs authorities found 826 kilograms 54 grams of heroin over the past three days, and the value of these drugs on the European black market exceeds 50 million euros. 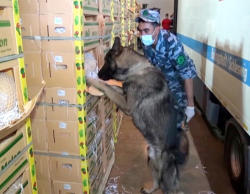