DOST Agency under the ministry held a press conference on the implementation of the new e-system on November 25, according to information posted in ministry’s official website,

During the meeting, the director of the State Social Protection Fund (SSPF) Himalay Mamishov spoke about the program of electronicization of services in the areas of labor, employment and social security. He stressed that upon the president’s assignment, the first proactive service - an automated pension mechanism has switched since the beginning of 2019. This has enabled to provide around 15,000 people with an e- appointment pension service without the need to apply for and submit documents to any organization when their retirement rights appears.

The director of the fund also said that by the presidential decree dated April 15, 2019, the amount of benefit for disability has been increased by 100 percent on average since April 1.

The head of the State Medical-Social Expertise and Rehabilitation Service under the Ministry Javid Abdul-Gadirov said the disability assessment was done through an electronic system, and the disability benefits have already been launched properly. The new e-system will cover about 16,000 citizens per year.

It was noted that after assigning a disability level to anyone in the Ministry's "Disability" subsystem, the information will be transferred to the “Social Payments” subsystem. The “Social Payments” subsystem automatically assigns monthly benefits to a person without a right to a pension. The citizen will be sent an SMS and a relevant bank will be sent a payment card order for that person. The person arrives at the mentioned bank branch within 15 days and receives the payment card. If the person does not have a telephone, it is available to get information via Center 142, “e-social” internet portal or contact the SSPF's relevant department at the Ministry.

E- appointment system of benefits for persons with disabilities in certain categories will also be electronicizated soon.

After the completion of benefits and pensions automation, approximately 180,000 appointments will be systemized in a fully electronically, proactive manner, without the need for citizens to go to any address or submit documents. 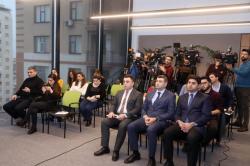