The "Pomegranate Valley" agrarian tour was held on October 12 with the participation of Agrarian Procurement and Supply OJSC (which is subordinate under the Agriculture Ministry), Agrarian Credit and Development Agency and UN Development Program.

Leaders of diplomatic missions accredited in Azerbaijan, representatives of international organizations, relevant state and private organizations participated in the agrarian tour organized in the village of Meyniman of Azerbaijan’s Hajigabul region.

Leyla Mammadova, Chair of the Management Board of the Agro Procurement and Supply OJSC, gave detailed information about the agro-ecotourism project "From City to Village", which is one of the first projects in the field of agro-tourism in Azerbaijan.

"The organization of such tours is of great importance in terms of promotion of agriculture in Azerbaijan, especially pomegranates growing, which is a new and promising area of country’s non-oil sector," Mammadova stated.

Speaking at the ceremony held during the Agrarian tour, Alessandro Fracassetti who is UNDP Resident Representative for Azerbaijan, said that the joint project of the Ministry of Agriculture of Azerbaijan and the UN Development Program “Conservation and Sustainable use of Agro-Biodiversity” is being successfully implemented.

In turn, the head of Red Valley LLC Rashad Shirinov spoke about pomegranate farming. He noted that the MinaShirin variety, which was acquired through a long period of research and work, was included in the Ministry of Agriculture's register in 2018 and was patented.

The quality and taste of the new variety "MinaShirin" is not inferior to other varieties of pomegranate. Large and juicy, with good taste and sour taste, this variety is about 20 centimeters in diameter.

As part of the tour, local and foreign visitors had a chance to  familiarize themselves with MinaShirin variety of pomegranate. They also were informed about the state of pomegranate breeding in the country, the process of growing and harvesting pomegranates.

The ecotourism and agrotourism are new and quite promising directions of tourism in Azerbaijan. The fact that ecotourism is gradually becoming popular in the country is natural, since there are all conditions for this, first of all, the unique geographic position and the nature of Azerbaijan. 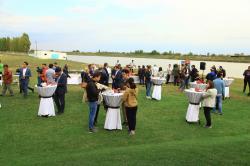