U.S. premiere screening of the film "Under One Sun" - produced with support from Heydar Aliyev Foundation – was successfully held in Los Angeles, Azerbaijan’s Consulate General in Los Angeles told Trend.

A well-attended event dedicated to the traditions of multiculturalism, diversity and tolerance in Azerbaijan was held on December 5, 2017 at the Church of Jesus Christ of Latter-day Saints, which is one of the largest and oldest churches of Los Angeles.

Held jointly by the LDS Church and Azerbaijan’s Consulate General in Los Angeles, the event was attended by consuls general and honorary consuls of various countries, faith leaders representing many different religions, journalists, members of various communities, representatives of art, culture, science and education, and others.

Speaking afterwards, Consul General of Azerbaijan in Los Angeles and Dean of the Los Angeles Consular Corps Nasimi Aghayev thanked the LDS Church for hosting this momentous celebration of multiculturalism, which, he said, was indicative of the Church's strong commitment to multi-faith and multicultural tolerance and harmony.

In his remarks, Aghayev highlighted the ancient traditions of tolerance and multiculturalism in Azerbaijan noting that these traditions have already been raised to the level of state policy in the country. The diplomat said that people of different ethnic and religious backgrounds, including Muslims, Christians, Jews, Zoroastrians, Baha’is and representatives of other faiths have been living together in peace, brotherhood and mutual respect for many centuries in Azerbaijan.

The Consul General noted that President Ilham Aliyev repeatedly said that “multiculturalism is a life style in Azerbaijan”.

“We all see and cherish diversity as a virtue that strengthens us and makes our world a better place,” said Consul General Aghayev, concluding his remarks.

Other speakers of the evening included Bishop Juan Carlos Mendez, the Director of the “Churches in Action” and Chair of the Los Angeles Interfaith Council; Mobed Zarrir Bhandara, Officiating Priest Zoroastrian Association of California and Member of Federation of Zoroastrian Associations of North America; and Randolph Dobbs, Member of the Regional Baha’i Council of California and Secretary of the Spiritual Assembly of the Baha’is of Los Angeles. Rabbi Abraham Cooper, Associate Dean of the Simon Wiesenthal Center, who could not be at the event due to his overseas travels sent a video greeting.

The speakers noted that at a time when hate speech, xenophobia and racial discrimination are on the rise in various parts of the world, with its working model of multiculturalism Azerbaijan is showing the possibility of peace, tolerance, acceptance and harmony among different religions and ethnic groups.

Then, a documentary film titled “Under One Sun”, which was made in 2016 under the auspices of Azerbaijan’s Heydar Aliyev Foundation and executively produced by Arzu Aliyeva, was screened. This became the first-ever U.S. screening of the film that features various ethnic and religious groups living in Azerbaijan peacefully together, freely preserving and strengthening their languages, cultures and traditions, without any discrimination. The film, which is a beautiful testimony to Azerbaijan’s multiculturalism, was received with long applauses by the audience.

Following the screening, a member of the Church beautifully performed Azerbaijani classical music on piano. 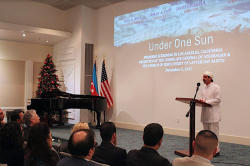