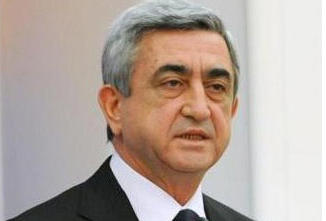 The Nagorno-Karabakh conflict should be resolved only through negotiations and compromises, said Armenian Prime Minister Serzh Sargsyan in an interview with the Shant TV channel while answering the question that the next generation has an unresolved Nagorno-Karabakh conflict and, possibly, new generations with new approaches will find its solution.

Sargsyan said "I'm not inclined to think that we leave the issue to the next generation". "The fact that I am the prime minister today is also connected with this: the negotiation process must continue, we will not change our positions", he said.

Sargsyan said that the way of peace is to come to an agreement. "And it is necessary to take into account opinions of both sides to reach agreement", he added.