Azerbaijani cuisine is full of rich and delicious flavors that never ceased to surprise. In general there are many things one can try, from hot meat dishes to mouthwatering desserts.

Plenty of vegetables, herbs and different spices including fresh mint, coriander, dill, basil, parsley as well as sumac, cumin, saffron, and cinnamon are very popular and often accompany the main dishes in Azerbaijan.

Everyone who is planning a trip to the Land of Fire need to try the unique dish of the national cuisine called dolma. The name of this ancient national dish originates from the Azerbaijani verb “doldurmag” (to fill). In this meal, vine leaves, cabbage, eggplant, pepper or tomato are stuffed with minced meat.

A culinary book titled "Dolma in Azerbaijani cuisine. 381 recipes" has been included in the top three best culinary books of the Gourmand World Cookbook Awards, which is considered as the "Oscars" of the cookbook world. Every year, cooks, chefs, foodies, culinary writers, and food experts from all over the world come together at the annual Awards.

The book contains recipes for 381 types of dolma that were presented at the International dolma festivals in Azerbaijan in 2016 and 2017, Trend Life reported.

Dolma is traditionally stuffed with ground lamb and/or beef, rice, onions, and herbs. In different regions of Azerbaijan, dolma is made of the leaves of the grape tree, lime tree, quince, beech tree, sorrel, bean leaves, penny cress and other plants. 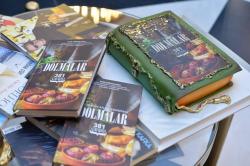 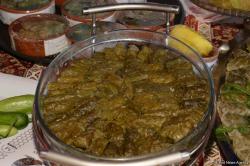