Next promotion of Azerbaijan in international arena In the midst of a historical and extremely important period for our country amid the intense struggle not only on the front but also in the information space, Azercell has once again managed to promote Azerbaijan in the international arena.

Thus, the social project #QadınDediyin, developed by the leading mobile operator of Azerbaijan Azercell, won two high awards at the Red Jolbors festival, which is considered one of the most famous competitions in the field of marketing, advertising, and communication in Central Asia. In the competition, which was attended by hundreds of representatives from Central Asia and the CIS, the project #QadınDediyin took second place among the best CSR projects in the region according to the jury’s decision and was awarded a Silver Medal and a Bronze Medal in the Best Digital Campaign nomination.

The messages and video of the #QadınDediyin project talk about the existing stereotypes about women in society and the need to change this approach. The lives of successful Azerbaijani female athletes are presented in the example of women who succeeded to break these stereotypes with their behavior. Thus, a woman who knows her rights and responsibilities, and chooses her own path, and perseveres towards it, proves that she has enough strength, intelligence, and will to overcome obstacles and make progress. She also shows that there are no boundaries on the path to development, education, and success.

It is worth noting that this project caused a massive outcry on social networks, was supported by compelling influencers and bloggers and was able to attract public attention.

Remarkably, for the first time this year, more than 250 advertisers, marketers, brand managers, and PR specialists presented their projects at the Red Jolbors Communication Festival. They competed for prizes in more than 20 nominations in seven categories. Well-known advertising agencies of Europe and the CIS, winners of international awards were represented in the evaluation commission. The festival was also remembered by its distinguished guests. Experts from well-known companies such as Google, Mail.ru Group, PepsiCo, Skyeng, Borjomi Global, and Forbes Russia spoke at the enlightening session of the Jolbors Education. Famous director Timur Bekmambetov and well-known advertiser Maxim Ponamaryov addressed the attendees of the competition. The Red Jolbors festival gives participants the opportunity to increase their professional level, as well as to realize interesting creative projects of the representatives from different countries.

Azercell has successfully represented Azerbaijan in local and international competitions and won top awards on multiple occasions. The company's projects and initiatives in the field of CSR were presented among the best in the world and were one of the successful steps taken to promote our country in the international arena. 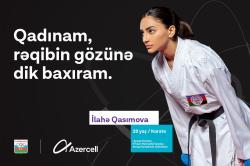 Azercell makes next contribution to the "Virtual School" project!

Next gift top-ups to over 1,000 healthcare workers