Azerbaijan’s Azerishig OJSC is taking urgent measures to supply power to important strategic facilities in the territories liberated from Armenian occupation within the framework of the ‘Azerishig in Karabakh’ project, Trend reports in Oct.26 citing the company.

According to the company, in the liberated territories, it’s planned to set up new, 110, 35, and 0.4 kV power supply grids and networks using advanced technologies, relay protection, and electronic type automation systems, remote dispatch control, as well as the development of projects for the laying of 35 and 0.4 kV power lines.

In general, a phased implementation of these projects is envisaged. Prior to the implementation of the planned projects, the company began to implement measures within the ‘Azerishig in Karabakh’ project for the urgent supply of electricity to strategic objects of particular importance in the territories liberated from Armenian occupation. 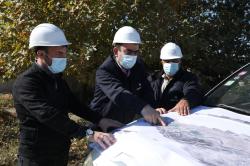