The tournament brought together 384 karate fighters from 34 countries.

Rafael Aghayev, nicknamed “Black brilliant of the world karate”, has managed to achieve all of the highest sporting victories in karate; he is multiple European Champion and repeated World Champion.

Not so long ego, Aghayev has become the fife-time world champion.  The documentary about the 31-year-old Azerbaijani sportsman was premiered on November 29.

In 2013, Azerbaijani karate fighter Aykhan Mamayev won a first gold medal for the Azerbaijani team at the Islamic Solidarity Games being held in Palembang, Indonesia. 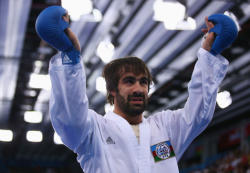