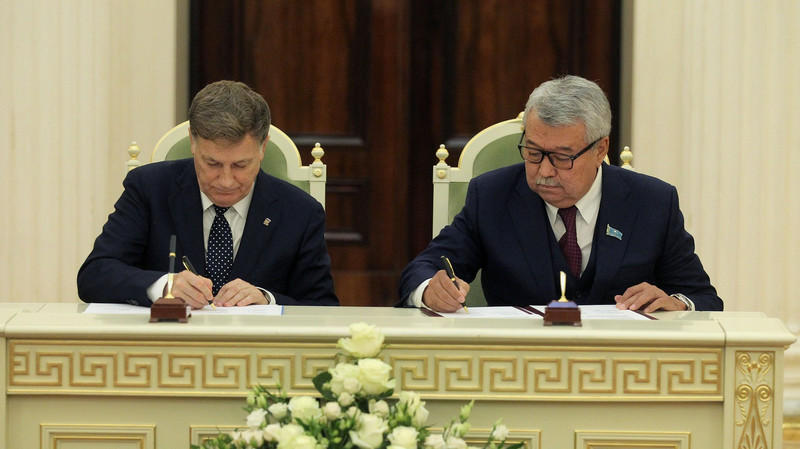 Kazakhstan is the second largest trading partner of St. Petersburg, said Russian parliamentarian at a meeting with the delegation from Almaty.

Vyacheslav Makarov, Chairman of the Legislative Assembly of St. Petersburg, met with the Almaty delegation led by Maslikhat’s secretary Kaldybai Kazanbayev in the Mariinsky Palace on November 14.

Makarov welcomed the guests and expressed gratitude for Kazakhstan’s support for the Russian position in the international arena, reports the press service of the Embassy of Kazakhstan in Russia.

He stressed that the friendly relations of the states are based on a long-term common history and invited members of the delegation to take part in celebrations marking the 75th anniversary of the complete liberation of Leningrad from the Nazi blockade.

Russian parliamentarian said that people evacuated from the besieged city, for life retained memories of the hospitality of the Kazakh people. Today, Kazakhstan is the second largest trading partner of St. Petersburg. Sure that Russia and Kazakhstan have huge prospects in the sphere of development of economic cooperation and investment activity.

Kazanbayev supported the initiatives expressed during the meeting to deepen the interregional cooperation between St. Petersburg and Almaty. He noted that St. Petersburg is called the Northern Capital of Russia, while Almaty is called the Southern Capital of Kazakhstan, and expressed hope for a productive exchange of experience between the two sides.

After the meeting, a signing ceremony of a memorandum of understanding between the Legislative Assembly of St. Petersburg and the maslikhat of Almaty was held.

In the structure of Kazakhstan’s trade turnover with the countries of the EAEU, more than 90 percent fall for Russia. Since in Russia there is a tendency for import substitution and reorientation to export supplies to Southeast Asia, Kazakhstan can play its own role, corresponding to the scale of the economy, for example, in the supply of food to the Russian market, as well as its transit potential.

For seven months of 2018, Russian exports to Kazakhstan grew by about 8 percent, and Kazakhstan's to Russia - by more than 12 percent.