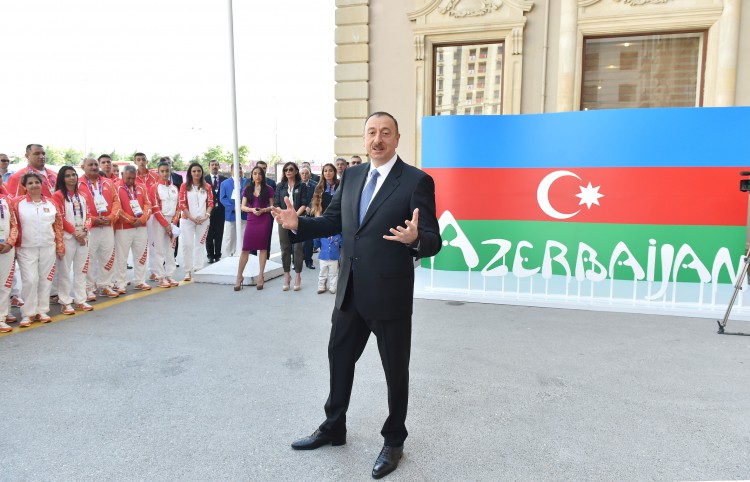 “I am sure that we will hold the world's best Games although we had only two and a half years to get prepared to the tournament," the head of state stressed. "Our people, our government have shown its strength. Within a short period, we have prepared world-class Games, on the level of Summer Olympic Games and we will conduct it successfully."

The first ever European Games will gather over 6,000 athletes from 50 countries in Baku on June 12-28. The athletes will compete in 20 sports, 16 of which are Olympic and 12 will provide licenses for Rio 2016 Olympic Games.

President Aliyev, accompanied by First Lady and Chairperson of the Baku 2015 first European Games Organizing Committee Mehriban Aliyeva, and family members visited the Azerbaijani delegation at the Athletes Village in Baku on June 9.

The head of state wished the athletes success in the upcoming Games.

The Azerbaijani team will take part in the Games in a big lineup, the president said. He went on to add, that he has visited all Summer Olympic Games since 2000 and solemnly saw the athletes off to the Games.

“This time the athletes of the European countries are coming to Azerbaijan," he said, noting the wonderful conditions created in the Athletes Village in Baku.

“These Games will show the strength of our state, talent of our people and professionalism of our athletes. I am confident that the athletes will gladden us with victories. Our team consists of the strongest athletes of the country. In general, all foreign teams present the most top athletes," the president said.

The European Games have turned into a nationwide issue in Azerbaijan. The torch lit in our ancient temple of Ateshgah has traveled all over the country and returned to Baku. About two million people in all our regions, including Baku, welcomed the torch and celebrated this holiday. It really is a great holiday, a historic event for our country, and the historic event for Europe,” he stressed.

The president went on to add that the country is proud of its athletes and is waiting for new victories.

"I am confident that the results will be very good. I cordially welcome you once again and wish you victory. The people of Azerbaijan loves you and supports you, and this support will give you an extra strength,” President Aliyev added.

Azerbaijan joins the struggle for supremacy in the largest sporting event in Europe with 291 athletes.

Earlier, the head of state signed an order on establishing remuneration for the highest results of the national athletes and their trainers at the first European Games.

Along with this money award, the victory in the historic Games will bring all the Azerbaijani athletes great honor and respect.