Azerbaijani Deputy Defence Minister and Air Force Commander Ramiz Tahirov has participated in the Distinguished Visitors Day held as part of the Anatolian Phoenix-2021 exercises in Turkey, the Defence Ministry reported on June 1.

First, the guests observed the demonstration flights of F-5 and F-16 aircraft belonging to the Solo Turk and the Turkish Stars aviation groups of the Turkish Air Force.

Later, a briefing was given about the goal of the drills, the military personnel's readiness and accommodation, forces involved in the drills, fulfilled tasks, flights, and the use of aircraft.

The guests familiarized themselves with the military personnel and aircraft involved in the exercises and observed the practical fulfillment of the assigned tasks. The crews involved in the drills fulfilled tasks for various episodes.

The level of professionalism of Azerbaijan's Air Force and Special Naval Forces personnel was highly evaluated by the exercise leadership.

Meanwhile, Turkey’s National Defence Ministry shared new footage of the Anatolian Phoenix-2021 drills held in the country with the participation of Azerbaijani servicemen.

Servicemen from different countries joined the drills held at an airbase in Turkey's Konya. The exercises, which started on May 24, will last until June 4. 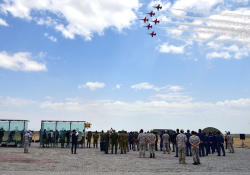